Robots and computers are replacing people everywhere; doctors, pilots, even journalists. Is this leading to a dystopian society, or could it be something positive? 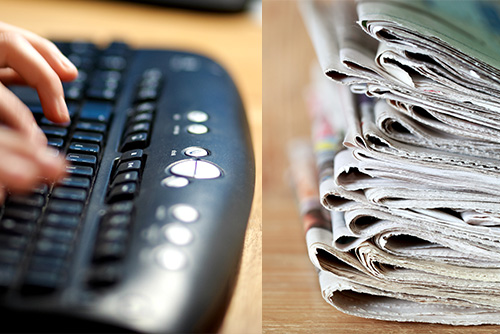 With this in mind, researchers from the Media Management and Transformation Centre (MMTC) at Jönköping International Business School, Jönköping University have launched the project DPer News (Digital Personalization of the News), with support from the Knowledge Foundation.

Digitalization is the integration of digital technologies into everyday life, but it is also the process of moving to a digital business. The media industry, and news in particular, is the starting point for the Dper News project, but virtually all industries are facing digitalization.

“The angle of digitalization is very much in demand today, and companies are eager to get help to transform”, says project director Mart Ots. “The general question is how can algorithms replace humans in repetitive professions? Journalism may not seem like a repetitive job, but when it comes to writing about finance and sports, it very well can be.”

In some areas, robots can be used to assist journalists by finding and analyzing data, but the journalist still writes the story. In other cases, robots could do the actual writing. The DPer News project wants to find creative methods for robotization that can help the news industry create more interesting news.

“DPer News is about how we can make news stories that are not just cheap and convenient, but more meaningful and personal. It worries me that just because we can get robots to mine and condense data, that’s all we’ll do”, says Professor Daved Barry. “Robots can target you and quickly give you the content you want, like the latest sports scores. But what about giving you content that would surprise you, that would help you think in out-of-the-box ways?”

Journalism, at its heart, is a very human enterprise. Can it be done by robots? Representing different views on this, the project involves experts on data mining, innovation and creativity, the news company Hallpressen, and computer consultants Infomaker and PDB. It connects with two other research projects at MMTC: DATAMINE which has received Regional funding, and the Digital Business Innovation Studio has received a grant from Vinnova.